Kings of the Road: The Keke NAPEP Story 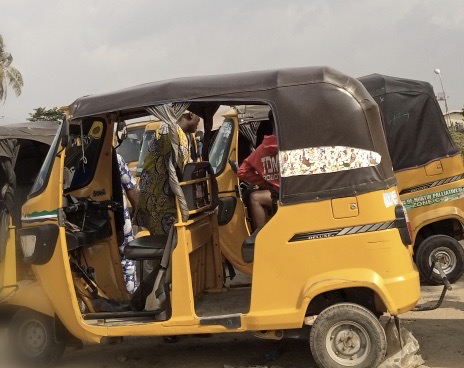 The ubiquitous three-legged motorized tricycles, known across Nigeria as keke and which Lagosians call “keke Marwa”, have gained popularity as one of the major commercialized transportation systems in Nigeria. They are found in the nooks and crannies of most towns and cities across Nigeria. The first mention of rickshaws in the country are found during the military regime of Muhammad Buba Marwa in 1996, when he introduced the tricycles as a means of transportation in Nigeria and the vehicles were dubbed “keke Marwa” in recognition of this novel event.

In reality, the popularity of this commercialized transportation system that is now prevalent across Nigeria can be associated with the National Poverty Eradication Program, called “NAPEP”. The program began during the president Olusegun Obasanjo regime in 2001. It was a program designed to eradicate poverty and create more employment opportunities for the many unemployed youth roaming the streets of the capital city, Abuja. In 2001, NAPEP launched and distributed about 2,000 tricycles to the idle youth in the Federal Capital Territory of Abuja, with the inscription “Keke NAPEP”, which means “NAPEP’s Bicycles.”

In 2004, NAPEP further distributed over 5,000 units of mopeds to the other 36 states of the country, aided by astute business owners who followed by helping to push the tricycles further out. Over the years, there has emerged a cottage industry of tricycle repair shops, part dealers, and thousands of moped drivers moving people around major streets of Abuja and other cities.

Riding a keke is an exercise in endurance. The vehicle has the capacity for four passengers and a driver. Three passengers sit at the back, and one passenger sits beside the driver at the front. They have no door, but they come with a fabric-like material hung on its open sides. The material is most times used to prevent rain breeze from disturbing the passengers during showers.

Recent research shows that about 59% of the tricycles total passengers reported discomfort using the tricycles. Among these, 26.6% complained of strains at hips and upper legs, 22.9% neck pains, and 21.0% reported knee and lower leg pain. More than 23% of the affected attributed this to a lack of space for adjustment. The height of a tricycle is usually quite small, which causes much discomfort for tall passengers. To prevent injury and discomfort, the government has regulated a tricycle to primarily carry two passengers at a time, with three passengers being the maximum.

In early 2020, the state government announced a ban on motorcycles and tricycles in some residential and commercial areas of the city. The ban, according to Gbenga Omotosho, the state’s commissioner for information and strategy, was initiated “after a robust assessment between government and state security council.” The government decided to put the ban in place to mitigate the “death and disorderliness” associated with motor bike taxis and tricycles.

Still, the keke has endured. They are as prevalent today as they were when the ban came into effect. In the absence of a truly efficient mass transit system in place, a ban can only be effective if there are alternatives to the public.

The ubiquitous three-legged motorized tricycles, known across Nigeria as keke

In comparison to other forms of private transportation vehicles in Lagos, the keke is much safer than the other mass transit modes. These additional transport options include motorcycles, danfo, which are minivans, and molue, slightly larger, multi-rider vehicles – like small buses. All are equally pervasive on city roads. Traffic jams and delays are common in Lagos as the keke meander through unkept and poorly maintained public roads add to the stress of moving around in any of the contrivances. On top of that, keke operators are often impatient, which sometimes lead to bottlenecks or worse – accidents and injury to the public are common.

The good side of course, is the convenience and affordability for citizens. Fares are cheap and the keke is everywhere. They navigate better than cars and buses, especially in busy traffic. The commercialized rickshaw transportation system has been a boon to the poor and underprivileged youth of Nigeria. Its introduction has reduced the unemployment rate across the nation. Idle youth can now take up the job to provide their daily needs.